Until Death Do Us Part

In my home country, Japan, there is a legend for girls that says that their prospective husbands have their little toes tied up to them with an invisible red thread. I used to believe in this legend as well. In my opinion it is wonderful to be able to believe in such a thing.

Since we’re infants, we are educated to play a role either as a woman or as man. I still remember when I used to play house-dolls with my friends and how much we enjoyed playing the mother’s role, like all the mothers of every mother. It is a simple but very pleasing memory that all women have inside. However, nowadays I often feel a victim of the male order and often wonder what can I do about it.

I was thinking of this as I was making my box and I felt like I was playing with dolls again because I was doing typical housework tasks such as sewing, washing, and ironing.

I hope you will tender my piece during the traveling exhibition as if it were our collective memory, which men will never be able to understand. And please, wash it and iron it when needed.

P.S. Do you know what? In Japanese, when we say “to get married” we use the word “to be tied up.” In the end, every princess will be tied up to their blue prince. 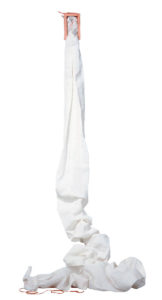