Tajima Box Project. An artist and an extraordinary woman collaborate to create a box.

We live in times of war, where racial profiling threatens the freedom of Arab Americans. By transforming this wooden box into a shrine representing my family’s internment in Japanese American relocation camps, I hope that racial profiling will not happen again.

Symbols of the highest decorated American 442 Regimental Combat Unit, the luggage tags with family numbers for the Takayama and Ogawas, rotate around the box symbolically, tied with barbed wire. Along the perimeter of the black tray, a plant revered by Japanese Americans, connects with barbed wire symbolizing their incarceration. A gold crane perched on a post, represents the Hiroshima bomb.

Thirty-seven last names along the edge of the tray represent hundreds of my family members who were incarcerated during World War II, remembering freedom is fragile, and racial profiling is intolerable. 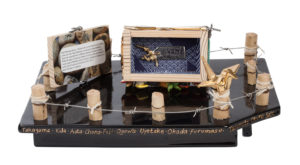