What it Takes to Make Change: Sharifa Wilson and Transforming a City

Tajima Box Project. An artist and an extraordinary woman collaborate to create a box.

When I first spoke with Sharifa, the former Mayor of East Palo Alto, I was struck by her absolute faith in her ability to make change. “I consider myself an optimist” citing her family as her primary inspiration. As Sharifa went on to discuss the strategies she has used to bring money, businesses, jobs and better education opportunities into East Palo Alto, it became clear that persistence was something she didn’t think twice about.

While considering what I could do for an artwork about Sharifa, I thought about what a formidable force she was. A picture came to mind of some unsuspecting guy delivering her the “Sorry lady, that’s the way it is” line and what she would do with that. This artwork is about the refusal to accept that answer and the possibilities it opens. 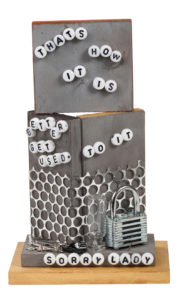