This box of boundaries and borders of seams and skin-colored patterns uses the images produced to explore the possibilities of connection. By using these borders between colors of skin as a connection instead of a boundary of separation, it creates a quilt-like or map-like pattern. The connection of the visual image similar to a map and the intellectual understanding of different ethnicities throughout the world attempts to introduce the possibility of these coming together beautifully without attempting uniformity.

This cloth covering, this skin is also superficial. This cloth is synthetic and covers the box almost completely, except for one run in the stocking and one square wall inside the box. These show the natural wood underneath this cloth skin, the same wood each woman began her box with.

The images produced from this quilting of panty-hose is almost primitive and yet the material is a symbol of progressive, fashionable women. The appearance of smooth, uniformly colored legs has been considered beautiful in Western Europe and America for some time now. This aspect introduces the difference in perspectives of beauty.

Sewing with my hair weaved in the traditional concept of long hair as beautiful and feminine. This image of women’s long hair is in many regions and reminds me of the many places I find hair I have shed, in the bed, in the shower, on my clothes, on the floor. Historically in some areas women used to sew with horse hair. The concept of women’s hair connecting many regions twists the projection of beauty into a powerful relationship where the object that was used as a thing to look at, now fulfills the position of bridging the boundaries, of connecting the borders.

The process of sewing this box reminded me of the women throughout the world who sew for their families and communities. They create to keep people clothed and warm. The process is time consuming and requires patience and care. The needles remain hanging from the box by hair and thread because we are still in the process of sewing our borders and recognizing our differences and using these to create a new understanding, a new connection of women artists around the world. 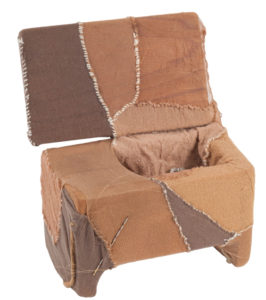