WBB was invited to participate in the 2002 Cultural Olympiad. The exhibition was rated as one of the top five events along with the Pilobolus Dance Theatre and Dale Chihuly. Children Beyond Borders, an adjunct project of the Olympiad, included a selection of boxes from over 6,000 children participants with disabilities around the world. Additionally, adjunct projects in Brigham City created 3,000 boxes for the Paralympics. Special guests included IOC Chairman’s wife, Mrs. Bovijn, and the UN Secretary General’s wife, Mrs. Annan.

LESSONS FROM THE BOXES 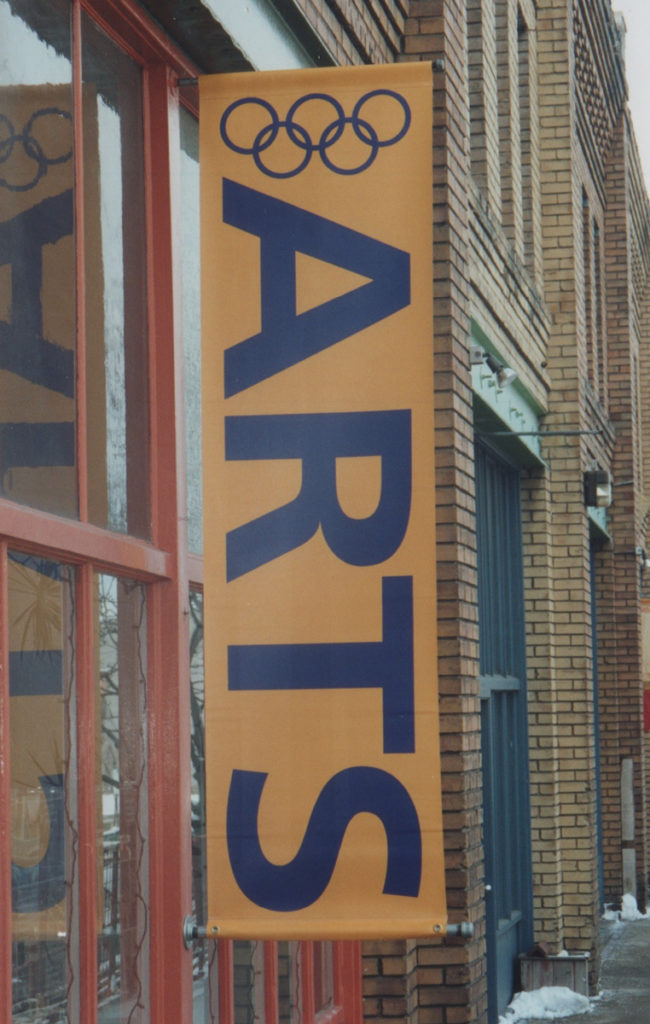 Thinking outside the box is neither a metaphor nor a joke to the artists in Women Beyond Borders. This astonishing, compressed exhibit, founded by California artists, Lorraine Serena and Elena Siff, has been growing for seven years from its grass roots and now includes hundreds of women artists from all over the globe. While the voices are diverse and the expressions range widely among individuals and artistic genres, the collective visions of women supersede all the boundaries of politics, disability, class or culture. Open these boxes, and you will recognize, in many shapes and colors, your own story.

If some issues could be termed archetypal “women’s” concerns, these boxes beautifully embody them. Many explore the bearing and caring for children, with associated images of wombs, nests, eggs, and private talismans of motherhood. Several pieces imply the violation of women’s deepest inside space, whether through violence or other kinds of abuse, as well as the particular powerlessness many women feel, whether physical or cultural in origin. Further, current neuro-anthropologists argue that many women possess more connections between their brain lobes and, therefore, easily inuit, communicate and cooperate – all “feminine” traits celebrated in these pieces.

WHAT IS A BOX?

Music box. Jewel box. Mailbox. Lunch Box. Pill box (both bunker and hat). Box springs. Shadow box. Box step. What is a box, exactly? Because there serve as coffins and cradles, gifts and shrines, torture chambers and treasures, boxes carry as many layers of meaning as they do lessons. In this project, the box is the given, the parameters representing the “rules” or laws with which we are presented and from which we must find or create our own meaning. Our box might be our gender, our socio-economic status, our degree of ability and disability. We can perceive our “givens” as limiting or liberating: the atonalist composer Schoenberg reminded us, “ There are still many beautiful songs to write in C-major.”

To some Utah artists, a box, loosely, is a place. Many of us live in our boxes comfortably, appreciating and intensifying their natural beauty, as Lee Bennion does by painting a magical nightscape on her “Moon Box.” In her characteristic abstract expressionistic style, Lee Deffebach adds a splashes of color to any environment, especially this “found” object. Jennifer Barton creates a tiny mansion and grounds from her box; perched on top is a half-nude ceramic doll with a pincushion and a tutu skirt on which are pinned lines about “cleaning our houses” of useless things but retaining foolish fears. Using imagery from her Corn Stalk Clan, Reyes Madalena celebrates her larger home – the earth, with a circular bowl and tiny figures representing different peoples. Jean Tokuda Irwin’s box tells a different story of place, implied first in her title, “East went West and got lost.” Her delicate collaged pictures of Japanese women and slivers of bamboo suggest a place at once disjointed and emergent, a tiny house of fractional walls and mysterious scrolls whispering of remoteness and strangers, but also of “beating out one’s own exile.”

To both the International and Utah artists, a box represents a repository for family memories and associations. Maureen O’Hare Ure placed two painted eggs insider her box, then crowned it with a fanciful songbird which, like many of her creations, in her words represent “all  the assorted family characters and stories filling my head as I paint.” As a new, nursing mother, Heidi Moller Somsen filled her box with tiny plastic dolls and plastered it with nipples from baby bottles, one of the few overtly humorous entries in the exhibit. Carla Jimison turned her box into a house papered with text about heredity, out of which grows a family tree, replete with names ribboning its branches. For Ruby Chacon Hurst, the project became part of her ongoing discovery and celebration of her Indian and Mexican heritages; the miniature portraits of women she painted all over her box, as well as the baby inside, represent part of her ‘personal ceremony for her invisible family.’

Three Utahns focused on the enigmatic qualities of a box, particularly its associations with spiritual mysteries.  Pandora, not incidentally, was the Athenian name for the Earth goddess Rhea, who originally released winged souls from her box, not the evils attributed to her in Hesoid’s anti-feminist fable. Using a closely related myth, Janet Shapero evokes the mixture of death and hope in Persephone legend; “ Entombed/ Exhumed” in beautiful wire mesh, Persephone is simultaneously trapped and empowered by her relations to her husband, the god of Hades, and her mother, the goddess of fertility. Trent Alvey, in “Cosmic Blue,” characteristically mixes science with spirituality and art, using blue- the color of argon in neon lights- to suggest the ambient energy around us all. Blue also united with tantric symbols for the throat chakra and Trent’s own poem,  which encourages women to speak out for what they believe. Carleen Jimenez tucked a red fabric slit into the white folds inside her box, then attached moveable wings to suggest simultaneously both sacred and sexual flight. The artist’s epigraph cautions, “When the secret mirror first opened, she was obliged to recognize the elaborate and multiform disguises behind which oneness lies.” This implies that, whether we join Saint Teresa in mystical ecstasy or simply put on our power suit for the day, we should remember the Platonic reality at the center of ourselves.

Whatever we suspect lies behind our disguises, we nonetheless continue to conceal or protect our innermost selves. Martha Klein played on “box” as the slang term for the woman’s most private parts, filling it with red sumac berries to symbolize a woman’s eggs, creating an “Ovarian Matrix” with threads from her weaver’s craft. Having worked with incarcerated populations, V. Kim Martinez portrays life as a box within another box of bars shaped like an animal trap. There is no escape from social structures or constant surveillance, and the only “view” is of a “core sample” of paint scrapings from her palette. In a lighter vein, Jacqui Biggs Larsen deconstructed her box and loosely reconnected the pieces to form a woman over whose heart she painted a question mark. While the piece is reminiscent as an unfolding child’s toy, in Larsen’s words, it illustrates “the dichotomy between the posed image of an individual and that individual’s inner life.” Sue Cotter locates a woman’s privacy inside her head. Her wild-haired box has a spooling tongue of flesh-colored, hand-made paper spilling Muriel Rukeyser’s lines: “What would happen if one woman told the truth about her life? The world would split open.”

As one would expect, private imagery predominates in some pieces, adding to the intrinsic mystery of any box. “Come Home” is covered with photographs Cary Stevens Jones took on one of her last car trips before she dies after a prolonged battle with cancer. The lid is propped permanently open to allow others to come

with her, as indeed, we will. Silvia Lis Davis chopped up her box and mixed it with wood scraps from other sculptures to laminate a cat’s head, sleepy and enigmatic as only a calico wood cat can be. Blanche Wilson flattened her box and carved it into a woodblock plate to print a hand holding a smaller one, set against a globe and bookshelves in the background. As a teacher of children who are blind, she feels that “women have always been teachers of those who are in the dark.” Of the Utah boxes, perhaps Bonnie Sucec’s is the most enigmatic. Her box is a magician’s stage prop, decorated in pink and bloody Victorian taste; the victim, represented by a little black bird, waits to be chopped in two. Bonnie’s title ominously suggests the predicament of far too many women: She didn’t put her knives away correctly.”

This exhibit elicits from its viewers a new response in new shapes. For me, as a writer, it inspired my stacking words into a different confinement and, thereby, discovering a different liberation:

What, precisely, is a box? What are its Platonic locks In wire, wood, words, flesh, in thought, or a relationship?

Who decides its right height, How fat its legs, its weight? Who Dictates to you?

What is your box? What does it mean to be a “woman”? What are your “borders”? These pieces answer with anger and beauty, fear and nostalgia and hope. For some, being a woman means feeling confined, literally or metaphorically, within borders of her own and someone else’s creation. Others defy any borders-physical mental, spiritual, or political. Even with their “given” box, all of these artists certainly ignore conceptual borders, whether they decorate their prison or blow it apart. The depth of vision and power of these tiny boxes belie their size, just like women everywhere- and just like art.