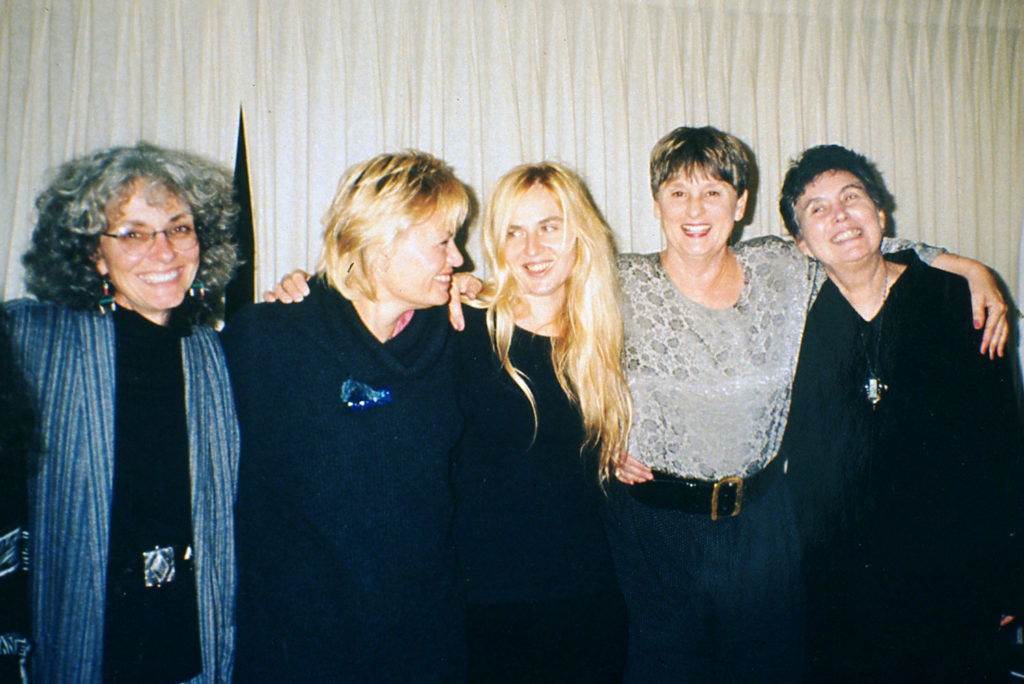 Until a strong line of love, confirmation, and example stretches from mother to daughter, from woman to woman across the generations, women will still be wandering in the wilderness.

The will that moves mountains has become a reality “The dream of a common language”, as Adrianne Rich stated.  The language of art in these boxes expresses the feelings of each woman who participated in the exposition and as a whole is the expression of millions of women in their daily reality. . . Women Beyond Borders tells much more about the human condition than all of the peace agreements that have been signed in the world to date.

Women Beyond Borders is a miracle of its time.

What an inspirational project! Nothing quite prepared me for the amazing diversity of the boxes. I am delighted to become Honorary Chairperson. I am certainly proud to have my name connected with such important work.

Women Beyond Borders has grown like a chain letter, with artists around the world creating works reflecting their lives. The popularity of the project may in part reflect the appeal of the box as an artistic starting point. Small may be beautiful; it can also be profoundly expressive.

WBB is an inspiring, thought-provoking, and aesthetically thrilling project. The connections it has fostered between nations and between women are remarkable. It also becomes a testament to the unbounded possibilities of human creativity, tested here in the seemingly simple transformation of a small wood box. As WBB travels around the world, it gains momentum and attention. Any museum would be proud to display these boxes, which operate at so many levels as works of art, as works by women, as works of international communication.

Women Beyond Borders is about dialogue. It is a gathering together of women so they can identify themselves, which is – speak for themselves. The importance of this action in a global society cannot be underestimated.

Women Beyond Borders: What a lovely, simple, yet important idea. In Kenya women have been subjugated for years as chattel, but recently many have begun finding their voices and power and it is good to see. Women Beyond Borders is an enormous step in enriching and connecting us.

Like my magical, mystical box, the Women Beyond Borders project gestures a place for the imagination. As a meeting of strangers and friends across seas, cultures, and languages, the exhibition becomes a universal sign of community; the passing on of ourselves through the gift of a box.

Women Beyond Borders speaks to a global consciousness of community that borders with all their powers can no longer keep contained.

Each work is an individual expression, but these works also express what it is to be a woman among women; an Israeli, among Israelis; an Argentinean among South Americans. The project is more than a set of isolated works of art:  it is about human relations.

— Lynn Scarlett, Deputy Secretary of the US Department of Interior

After seeing boxes from Vietnamese, Cuban and Israeli women, I felt such a big pain in my heart. I understand the cries, tears, and sorrows of the persecuted nations. I wish I could express the feelings which I had while looking at each box.  We should have more exhibitions like this which give us the hope of being understood and of being able to break the chains our society has put upon us. The boxes open up the worlds, souls and hearts of women for others to understand and help us to find strength in our future fight with our destiny.

Women Beyond Borders reinforces the fact that we are in great and immediate need of an open and honest communication which moves us toward a spiritually rejuvenated plane of human relationship among the members of the world-wide family of art.

I could feel the women whispering, like clocks ticking, like all these wild, intentional undone heartbeats. I will tell everyone.

From our grassroots beginning in Santa Barbara in 1991 to an international tour that has visited 50 nations.